Worrying gaps in Europe’s readiness for the knowledge economy

There are worrying gaps in Europe when it comes to the ability of different EU countries, regions and cities to innovate and develop knowledge-based economies. That’s my take from a report just published by ESPON which is an EU funded initiative that provides pan-European research on regions, cities and territories in the EU.

Called “The European Territorial Review: Territorial cooperation for the future of Europe” the report provides analysis on seven major pan-European issues including ageing and migration, employment in the knowledge economy, boosting renewable energy sources, developing the circular economy and physical and digital connectivity and improving the quality of life through services such as healthcare, education, public transport and waste disposal.

Economicshelp.org describes the knowledge economy as “the sector of the economy which is increasingly based on knowledge-intensive activities, creating a greater reliance on intellectual capital rather than physical inputs.” So think about digital technologies, robotic manufacturing, artificial intelligence or jobs that require specialisation in the STEM fields of science, technology, engineering and maths.

Service industries such as healthcare, software design and education and businesses such as insurance and information and communications are also associated with the knowledge economy. It’s about increasingly moving away from traditional, manual labour jobs to those involving the likes of high-tech and digital technologies that all help to drive knowledge-based capital (KBC).

Ensuring we have a skilled workforce for the knowledge economy will be increasingly important as we move more towards Industry 4.0 or the fourth industrial revolution as it’s being called. Industry 4.0 is a term that was coined by the German government as it recognised the increasing shift towards sophisticated automation, the digitalisation of manufacturing processes and greater connections and connectivity over the Internet of Things.

Skills required for the future

The more we advance towards a knowledge economy, the more we need to ensure we have the skills and trained people for the jobs these advanced economies will require. That means upskilling workers coming from traditional or technologically-outdated sectors and educating younger generations in our schools, universities and other institutions of learning to ensure they have the skills to work in industries that will require a range of sophisticated and knowledge-based skills. 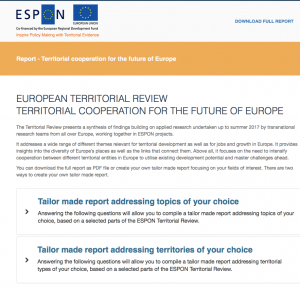 The most highly competitive and knowledge-based regions are mostly urban areas in northwest Europe. They include places like southern Germany, Paris and Dublin along with the Norwegian and Swedish west coast. ESPON found that these regions generally experienced economic growth and improvements or very small declines in the labour market since the economic and financial crises.

On the flip side the least competitive regions with low potential for the knowledge economy are places in many eastern European regions as well as in the south of Spain, Portugal, Greece and Italy.

The more developed the knowledge economy is in a region, the more advanced it becomes because of its ability to attract skilled workers and develop industries and create more jobs. The reverse is also the case for those areas that lag behind. The more they fail to progress and develop a knowledge economy, the less attractive they will be to high-skilled workers seeking interesting Industry 4.0 jobs and their accompanying salaries.

That’s a worrying development for these blackspots because it will potentially create an increasing knowledge-capital divide across Europe with the advanced high-tech regions and cities able to progress at far faster rates than Europe’s weaker less knowledge-advanced regions.

According to ESPON there is a greater share of people with higher education qualifications in northern Spain, Ireland, Scotland, western Norway as well as the metropolitan areas of Stockholm, Helsinki and Paris. ESPON also reports that in general Nordic and Baltic countries, the UK and Ireland as well as Spanish and southern French regions have a larger share of populations with higher education degrees in science and technology.

However they also found that while some of the above regions benefit from “this human capital” others see an outflow to other regions.

“In particular cities and regions in the Baltic States, Ireland, northern Spain and eastern Finland as well as urban regions in eastern European countries are challenged by highly-skilled people leaving.” (ESPON report)

Examples of excellence – Espoo in Finland

The town of Espoo in Finland is one of the most competitive knowledge economies in Europe according to ESPON. This Finnish hotbed of entrepreneurialism has one of the largest innovation hubs in the Nordic countries where at least one start-up is formed every week. The winning formula for Espoo’s success in building “innovation ecosystems” seems to be down to a number of factors including:

Cooperation and collaboration are key drivers if Europe is to compete on a global scale. That’s one of the conclusions ESPON draws in its chapter on the knowledge economy. That means countries and regions and cities across Europe reaching out to one another to collaborate and share.

“Knowledge economies benefit from territorial cooperation. A knowledge economy relies on sufficient social and human capital and interactions to flourish. Knowledge economies are thus partly defined by their capacity to cooperate. Cooperation rather than competition may also help to identify new technologies and emerging markets and so find a unique selling point or smart specialisation relevant for the region.” (ESPON report)