When I turned on the radio this morning I nearly fell out of bed when I heard the news headlines announcing the bombshell that Donald Trump had fired the American FBI chief, James Comey. If the same sort of thing had happened on an episode of Homeland you’d probably think it was compelling viewing but hardly realistic.

Yet there is nothing fictional about this gob-smacking thriller unfolding in Washington.

You’re probably well aware that the stated reason Trump is giving for firing Comey is because he claims he made a mess of previous investigations into Hillary Clinton’s use of a private email server during her time as Secretary of State.

But of course many suspect the real reason behind Comey’s dismissal is down to the FBI’s  other investigation into possible links between Russia and the Trump 2016 presidential campaign. If the FBI was to prove that Russia meddled in the elections and got Trump elected then his position in office would be extremely shaky. Comey seemed determined to expose any potential skulduggery between the Russians and Trump’s campaign. Now he’s been firmly stopped in his tracks from doing so.

And now those seeking clarity on any Russian interference in the elections fear that Comey’s demise heralds the end of that investigation.

Over the last few hours I’ve been following the plethora of views coming from the US on Comey’s sacking including comments from journalists, politicians, civil libertarians, spin doctors and commentators.

Predictably it seems that most of the Republicans in the US Congress are supporting Trump with the odd few expressing some reservations about the sacking and even fewer openly condemning it.

“While the President has the legal authority to remove the Director of the FBI, I am disappointed in the President’s decision to remove James Comey from office. James Comey is a man of honor and integrity, and he has led the FBI well in extraordinary circumstances. I have long called for a special congressional committee to investigate Russia’s interference in the 2016 election. The president’s decision to remove the FBI Director only confirms the need and the urgency of such a committee.”

So far then it looks like this latest tornado from the White House isn’t crushing Trump’s support within the Republican political establishment. And while some Republicans may be expressing reservations in private, they certainly don’t appear ready to come out all guns blazing against their man on Penn Ave.

So far so Republican. But what about the Democrats? Well of course they’ve been having a field day with one more outraged than the next.

Take the following tweets as examples: 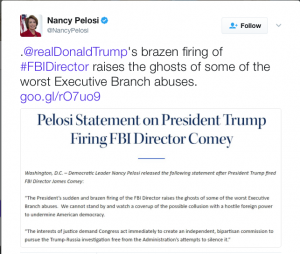 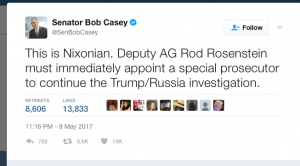 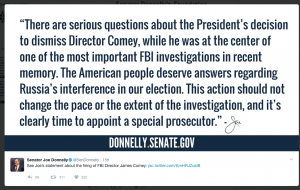 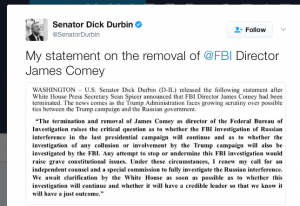 And when you leave the politicians aside, the language ratchets up even further. Here’s what the Executive Director of the American Civil Liberties Union, Anthony D. Romero said in a statement issued today.

“The independence of the FBI director is meant to ensure that the president does not operate above the law. For President Trump to fire the man responsible for investigating his own campaign’s ties to the Russians imperils that fundamental principle.

“Regardless of how one judges the performance of James Comey in either the Hillary Clinton or Russia investigations, President Trump’s dismissal of a sitting FBI director raises serious alarm bells for our system of checks and balances.”

Even more interesting was the slew of tweets that came from Hillary Clinton’s former campaign director Robby Mook. Now remember the Democrats have blamed Comey for scuppering Clinton’s election chances when he pursued his investigations into her email history. And so Mook is no fan of the erstwhile FBI chief. But he had this to say on his twitter account.

Mook posted the below update later.

The Washington’s Post columnist Eugene Robinson went even further by describing Comey’s sacking as ‘the most thuggish, venal act committed by a U.S. president since Richard Nixon’s desperate Saturday Night Massacre. In his scathing column, Robinson accused Trump of “attempting a power play straight from the playbook of some tinhorn dictator and he believes he will get away with it”.

These are strong words but will they sway public opinion? And more importantly, will this latest ploy of Trump’s be enough to weaken the powers of the FBI and prevent its investigation into those alleged links between his campaign and the Russians?  If that happens then Eugene Robinson’s reference to the ‘tinhorn dictator’ may end up being a particularly insightful description.

karencolemanirl karencolemanirl Hear my interview with @MariaWalshEU @FineGael about her #EuropeanParliament report on Covid & mental health in th… https://t.co/KiqFCxREZ8