My inspiration this week is Saffiyah Khan the young British woman of Bosnian and Pakistani background who calmly stood up to a bully from the EDL (English Defence League) during one of their protests in Birmingham last weekend. She later told the media the confrontation with the EDL thug erupted after she tried to defend a muslim woman in a hijab who was surrounded by EDL protesters. The story gained momentum after a photo of Khan facing down her EDL opponent went viral.

Here’s a screenshot of that picture taken by the Press Association photographer Joe Giddens.

Khan later went on to meet the women she stood up for at the protest. There’s a great video of the two of them talking about their encounter on this Guardian story. 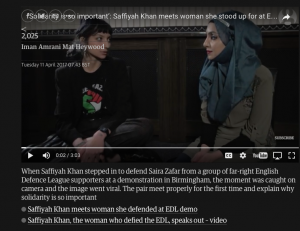 Saffiyah says she now wants to use her new-found fame to fight racism on the streets of the UK.