My weekly inspiration this week are the families of the 4 courageous Coast Guard Helicopter crew who lost their lives when Rescue 116 crashed off the Mayo coast last month. They have had to endure unimaginable pain listening to the details of the crash following the discovery of the helicopter’s black box and the subsequent initial findings by the Air Accident Investigation Unit’s preliminary investigation into the cause of the crash.

The courage and stoicism they have shown during these awful times are truly inspiring.

As I write this, two of the crew are still missing.

One can only imagine the awful nightmare the families of winch operator Paul Ormsby and winchman Ciarán Smith are going through as they desperately hope for news of the missing men.

Meanwhile the families of both Captain Dara Fitzpatrick and her Co-Pilot Captain Mark Duffy have to get on with their lives amid the uncertainty of the whereabouts of the two missing crew members and the awful reality that neither Dara nor Mark will be coming home.

Earlier this week Niamh Fitzpatrick, a sister of Dara tweeted a poem that had been written about her late sister by her cousin Stephen Fitzpatrick. Niamh read the poem at Dara’s month’s mind mass. You will see from the screenshot I took of Niamh’s twitter page the power of the beautiful elegy to the “Queen of the Sky”. 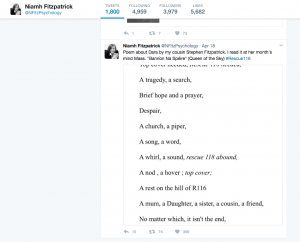 karencolemanirl karencolemanirl Hear my interview with @MariaWalshEU @FineGael about her #EuropeanParliament report on Covid & mental health in th… https://t.co/KiqFCxREZ8